WHY TORTURE IS WRONG AND THE PEOPLE WHO LOVE THEM - "Director Kauff exploits with finesse a myriad of Durang’s comic, cogent insights in this production that is graced by skilled comic actors who become a collection of outlandish characters who will bring audiences to frequent sustained laughter at their stage antics and perhaps at themselves as well." - Mary P. Johnson, DC Metro Arts

THE ROCKY HORROR SHOW - "Director Kristofer Kauff and his cast have produced a superb piece of artistry from top to bottom..." - Anne Vandercook, DC Metro Arts 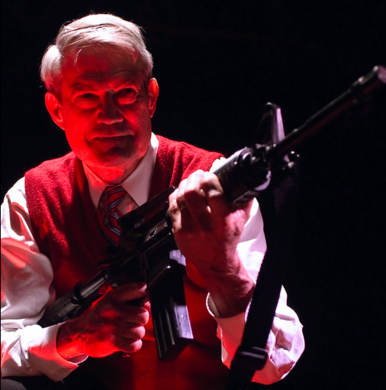 "Kris is an amazing director. His positive outlook makes everyone involved in a show raise their expectations and work to produce the best product possible. His vision is clear, his methods are creative and he articulates his ideas in a way everyone can understand and get behind. His patience is immense and his encouragement of actors, designers and crew brings out the best in all. I would happily work with him again anytime, anywhere and in any capacity!!!"  Theresa R. (Musical Director - The Producers)

"As a music director who has worked with Kris, I can't recommend him highly enough. He is a true professional and his knowledge of the craft is impeccable. He has an incredible rapport with his actors and really understands how to bring out their best work. He approaches his projects with a collaborative spirit and the people who work with him feel valued and heard. Definitely one of the best directors I've ever worked with!" - Cathy C. (Musical Director - Asssasins)

"I worked closely with Kris for about 4 months and found him to be professional, knowledgeable, innovative, encouraging, tactful, and inspiring: Kris is a dream Director! He really helped his actors find themselves in the parts, showed utmost respect and appreciation for his design team and didn't hesitate to dig in with some manual labor in helping get the set together!  In general, Kris just makes the process of putting on a show fun and rewarding!  I learned so much from working with Kris, I jumped on the opportunity to be his Assistant Director for his next outing with us!"  Beth T. (Superior Donuts)

"What impressed me: Kris is a visionary, very clear in his directing style and one of the few people who has the gift of believing that ANYTHING is possible and the SKILLS to actually prove it true. He was such an inspiring director that, no matter how difficult things became, you always had the strength and desire to go back to the drawing board to meet his high expectations in the finished product. Although he has very high standards, he was there day and night to offer an extra hand when necessary...whether it be helping with lighting, acting, or stage dressing. Kris's enthusiasm is completely contagious but he can also view things in a level and objective manner when necessary. "  Sherry C. (Props/Set Dressing - The Rocky Horror Show)

"The two shows I have done under Kris's direction have been my best performances in my acting career so far. He lets his actors play and try different ways of approaching a role In order to make choices in their acting that are real and believable, and ultimately find the character. His rehearsal style is fun while remaining professional. He makes you feel comfortable while also pushing you to new limits to bring out the best in you. I have learned so much from him and would love to work with him again." Paige T. (Actor - The Producers/The Rocky Horror Show) 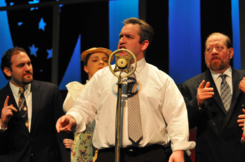 PIPPIN - "... the staging is completely original(particularly the finale, which is probably the best invention I've ever seen for the awkward final moments, which Mr. Fosse himself had troubles staging)"
- James Howard, Broadway World

SUPERIOR DONUTS - "It is the nuances of these broad-stroked characters that really makes Kauff’s directing exemplary. Each character comes with a fully developed back story and unique individuality that really gives the story structure; fully formulated notions that can be seen in the way the actors physical carry their characters, the way in which they speak, and other little mannerisms that speak volumes of Kauff’s creative ability in this production". - Amanda Gunther, Theatre Bloom